Today was the last day of vacation. Unfortunately it rained almost all day. We didn’t get to finish the cliff walk which stinks because I really wanted to do that. One good thing came out of the rain though. It started to pour as we were walking to the restaurant we wanted to go to, but it got so bad that we just stopped in front of the Rhode Island Quahog Company restaurant. This was honestly the best food we had while we were here. We enjoyed some more stuffed quahogs, surf and turf with stuffed lobster, stuffed shrimp. We tried their award winning, Rhode Islands’ best, New England Clam Chowder. Boy, was it good, actually the best I have ever had. I bought some cans of concentrate to bring home and make.

During the day while it was raining we visited the last mansion, the Breakers; good thing we bought the five mansion pass. The Breakers was completed in 1895 for Cornelius Vanderbilt II to replace the wooden house that was there originally that he bought very shortly before it burned. What is nice about this house is that it never changed hands out of the family so almost everything in there is original from the Vanderbilt family.

To learn more about the mansions and the Preservation Society of Newport County please visit their site here. I have to credit them for some info on the posts about the houses as well as the info I received while on the tour.

After the Breakers, we went down Belleview Avenue (where all the mansions are, pretty much the fancy pants street in Newport) to the Belcourt Castle. Oliver Hazard Perry Belmont was the first owner of Belcourt Castle. Later on Alva Erskine Smith Vanderbilt Belmont, Oliver’s wife joined him in the castle. If you remember the post on the Marble House, Alva was married to Cornelius Vanderbilt and divorced him and literally moved down the street to the Belcourt Castle. She received the Marble House after Cornelius Vanderbilt’s death and kept it store her dresses. Take a minute to let that set in…….. She kept a mansion as a storage closet. Anyway, after Oliver and Alva died, the son took over, but he sold the house and then it changed hands a few times. It was bought for $25,000, yes that’s right a whole mansion sized castle for that cheap, by the Tinney family, who still owns it today. One woman lives in the house all by herself. I can’t imagine why you need a whole mansion to yourself. Tours still go on in all the parts except her area. Because it was raining I couldn’t get many pictures of the outside, but you can view them at their website here.

The tour went well, it was great to be able to get up close to everything and not just pass through rooms like the Preservation Society tours, but since Belcourt Castle won’t sell the house to Society, the house is in shambles. All the precious architecture and fine linens and destroyed because it is not being restored. One room the floor bowed so much it was about an eight inch difference from one step to the next. Chairs were torn up and falling apart. The beautiful silk walls were torn and faded, same with the linen and cashmere curtains. There was even a puddle in one room. Ancient carpets are worn to nothing because they let everyone walk on them. Plaster ceilings had water damage or chipped paint. It’s just a huge shame that all that history is gone to waste. Over the years the family collected stuff from 33 different countries, and its all getting damaged. I think they are really dumb for not letting the Preservation Society preserve their family’s history that the care so much for.

After the tours we went souvenir shopping for everyone and ourselves. After dinner we headed home, where I am writing this post now. 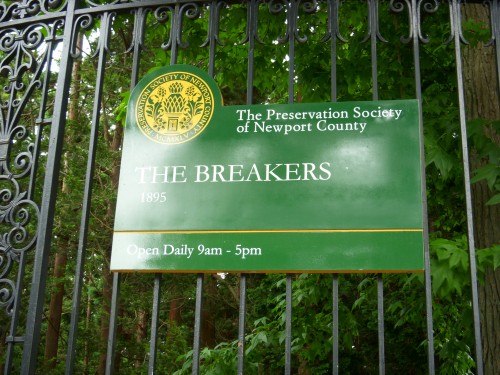 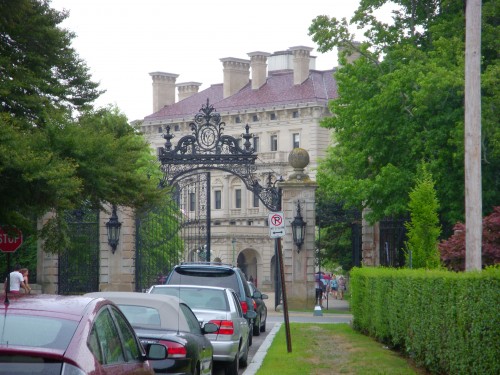 You can see how bad the rain is in this picture. Good thing we weren’t waiting on line when it was that bad. 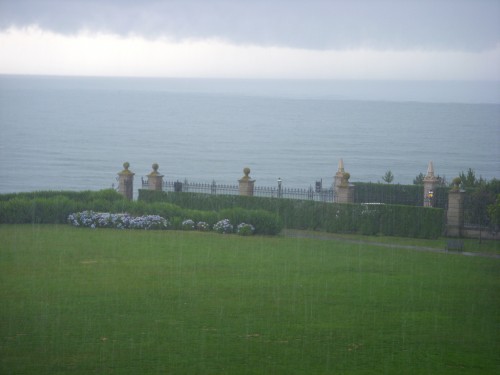 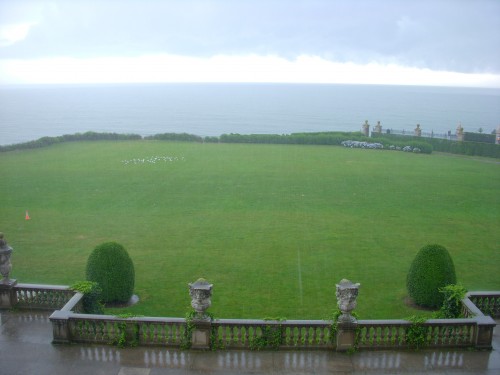 This little house on the grounds was actually a cottage for the kids to play in. It’s almost the size of a full house and four times larger than any NYC apartment. 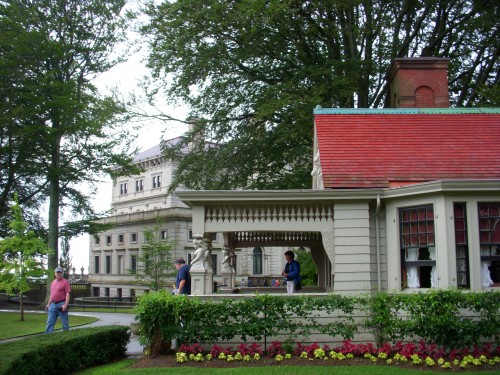 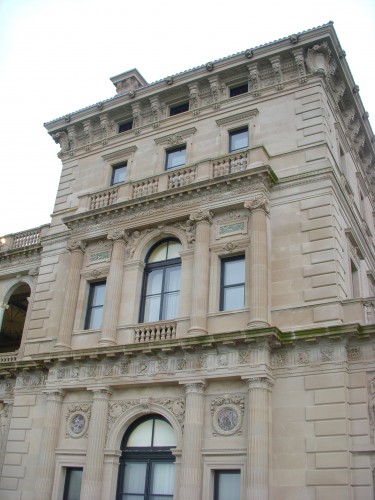 Belcourt Castle. Doesn’t look like the castle you probably had pictured in your head, but there is something in the house that allows it to be defined as a castle. 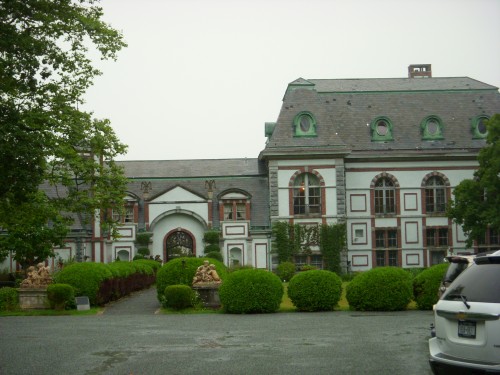 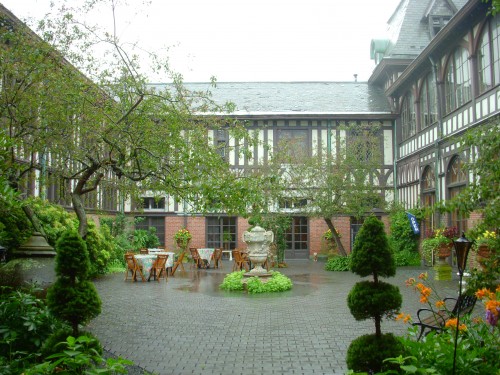 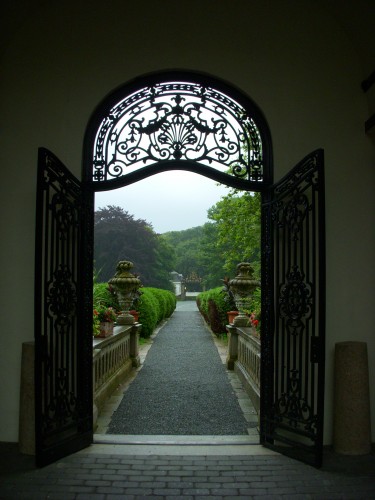 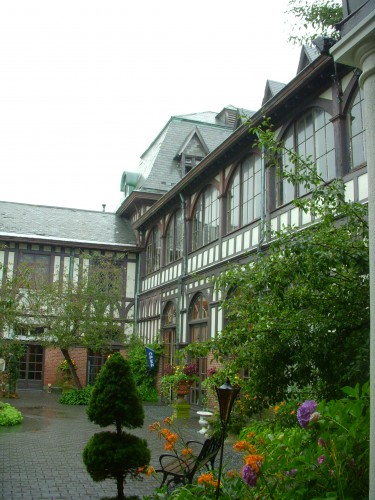 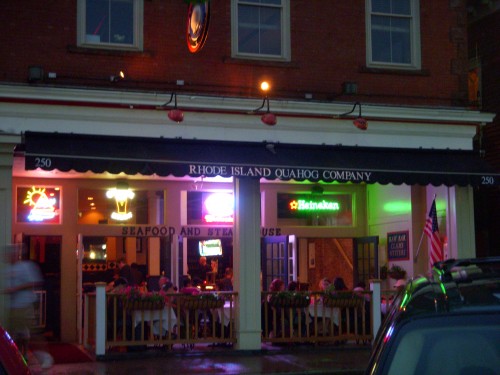 What I want to do next is formulate a hotel review as well as the whole Newport experience. Look for those posts coming during the week.

4 thoughts to “Last Day of Vacation”