Here is my 2016 NHL Stanley Cup Playoff Bracket. Haven’t payed enough attention to the West Coast teams this year as I normally do, so they are pretty much guesses on that side of the bracket. I believe the best match-ups for the first round are going to be the Blues vs. Blackhawks, Kings vs. Sharks, and Panthers vs. Islanders. Extremely happy with the Penguins’ end of the season, but here we are for the 3rd year in a row playing the Rangers. Of course I’m going to watch every second of this series being a Penguins fan and Jess a Rangers fan, but I’m just bored with the same teams always playing each other. I think this year the Pens will finally get past them and move on though. Love this time of the year! 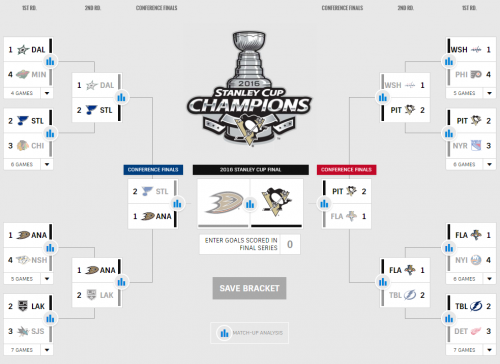