Hooray! The driver’s side button panel on my car is finally fixed. About 2 years ago while Jamie and I were on vacation the buttons and panel broke from extreme heat while the car was sitting in the driveway for a week. I’ve had the new parts to fix it since then, but just never bothered to fix it yet. I’m sure there’s a ton of lame excuses on my part for not doing it.

With Eric’s help the buttons got replaced and the cover plate installed so it looks great now. No more gaping hole that let a rush of cold air in as I drove in the winter.

It was easy to get the door panel off except for one part near the door handle. We could not get that to come off at all. We gave up and just did it the really hard way but leaving the panel on and just sticking our hands up from the bottom. It would have been a 10 minute project if the door panel came off, but that’s just my kind of luck.

While the panel was half off I was able to notice my speaker in the door was blown. Awesome. Guess the rest of the car is so loud and the tweeter in the door compensated for the loss in sound and I never noticed it. Of course I do notice it now since I know its blown, and it annoys the crap out of me. Looks like we’ll be pulling the door panel off again in the near future to replace the speaker.

Thanks for the help Eric! 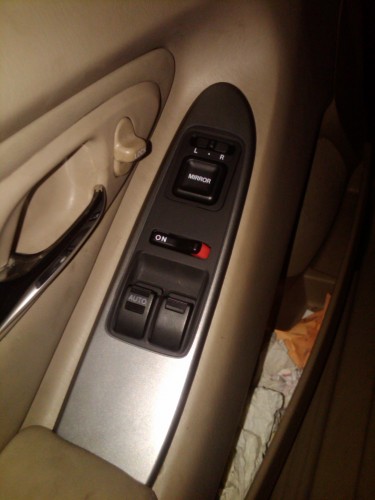 One thought to “Button Panel On My Car Is Finally Fixed!”