Already a week into the 2015 NHL Stanley Cup Playoffs and I still haven’t posted my bracket yet! Boy was it a close one for my Pittsburgh Penguins, just barely made it in this year. Unfortunately for us that means we need to face the President’s Trophy winners, the New York Rangers. I’m not too optimistic about this series. Good luck Pens!

This year I want to say it’s coming back to the Eastern Conference. Don’t think it’ll be the Rangers though, and not just because the trophy winners statistically don’t win the cup. In my bracket I’m going with Montreal. Really wanted to give it to Anaheim but I just don’t feel like it’s going to happen. Check out and pick apart my bracket below! 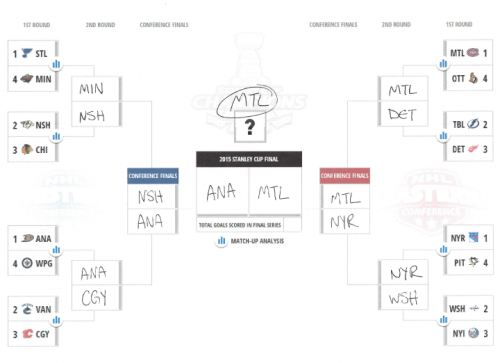