After watching Marc Staal get blasted in the eye socket with a puck last night I asked the question I have brought up for years, why hasn’t wearing visors been made into a rule yet? I mean every sport is cracking down on concussions and injuries, but the NHL hasn’t made a rule yet to force players to wear safety equipment. Yeah I know it’s the players choice and obviously he made a poor one, but the questions lies, why isn’t it mandatory? If Marc Staal was wearing one he would’ve stayed in the game and been able to shake it off. Instead he’s probably at home with a pack of green beans on his face for the next 2 days. I would think by now visors would be mandatory and we would still be arguing over going full cage face mask or not. Instead the conversation is still about visors. Hell, goalies aren’t even forced to wear the neck protectors and they get 30-40 pucks shot at them a night, some of them over 100MPH! I mean come on, step up your game NHL. You already have the technology, just enforce it. 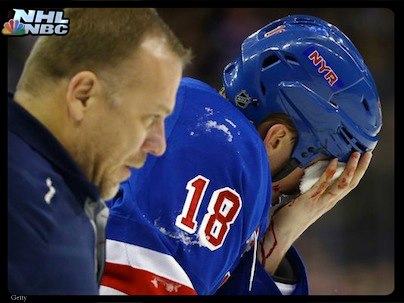